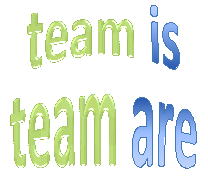 A phrase heard often to emphasize the meaning and essence of the word team. Interesting philosophically, but it does have implications for language use too. Namely, is team a singular or plural noun from a purely linguistic point of view?

Actually it varies depending on the variety of English used. Generally in the US, team as well as other words like family and government are traditionally considered singular – a unit that functions as one entity. However, in the UK most speakers adhere to the idea of “notional concord“ – that is, the notion of what is meant. Hence, the family (or team) are means the members of the group while the family (or team) is means the members function as one unit. But to return to the use of “generally“ in the US, things may be changing. Some sportswriters and sportcasters have begun adopting the notional concept and the Miami Heat are and Orlando Magic are have begun to appear in the American media.

As mentioned above, the concept of singular vs plural may be a purely philosophical argument and perhaps these questions should be left to the colleagues and followers of linguistic philosophers such as Paul Grice to address. But from a practical point of view, notional concord may be creating havoc among English speakers in my opinion, especially non-natives. More and more often I hear speakers exposed to notional concord incorrectly using unambiguously singular nouns. With the exception of editors and professional writers, notional grammar may have confused speakers enough to where they just throw up their hands and use whatever form seems handy at the moment. Perhaps the old rules are simply going down the proverbial drain.

And while on the subject of rules, we might consider whether English actually needs singular and plural forms of the verb in the present tense. For example, the Scandinavian languages have a verb structure very similar to English; they are fairly alike regarding the tenses. But the Scandinavian languages do not have the third-person singular “-s“ form in the present tense such as he is, she likes, it has. There is only one form in these cases, which in English translates to the plural forms – are, like and have respectively. It certainly would simplify English grammar, particularly for second language learners of English.

There is a precedence too for this type of reduction or loss. Historically, English with its Germanic roots had two forms of the second person pronoun: you and thou. Except for poetry and Shakespeare, thou (originally the singular) has basically disappeared in favor of you (originally the plural).

Back to the beginning of this discussion, since there is no “I“ in team, does that make team a plural? Or is it a singular, or both? In the same vein, there is no “we“ in government, so is it singular? Or a plural, or both? But that is definitely dangerous territory and does not only relate to language. Philosophical and political indeed.